Things To Do In Louisville

You are in for a treat. Louisville is a very surprising city. You just might be surpr

ised at all the opportunity there is to enjoy this town. From our many neighborhoods, all unique and charming in their own way… to the arts, the museums, the sports, the parks.

City Taste Tours City Tour of Louisville is the perfect way to start your exploration of this exciting city! On our tour of Louisville we will introduce you to 8 different areas of the city, take you to some of the coolest destinations, and make sure you know the best of the best in each neighborhood… just in case you decide to explore it further.

Until your City Sights Louisville tour though, let us tell you about some other attractions you just have to see while you are in Louisville.
Visit OLD LOUISVILLE and while you are there…

Conrad-Caldwell House
The “Conrad’s Castle,” which it is often referred to – is a magnificent Richardsonian Mansion situated on St. James Court in the heart of the neighborhood of Old Louisville. The Conrad-Caldwell House Museum is the most outstanding and stunning of the Old Louisville houses. This neighborhood was the former site of the Southern Exposition of 1883.

Visit DOWNTOWN LOUISVILLE, and while you are there…

THE SLUGGER MUSEUM AND FACTORY
It takes a special place to craft the Official Bat of Major League Baseball. Since 1884, Louisville Slugger has put prime lumber in the hands of the greatest players of the game. A visit to the museum shows you how the sport has changed a bit between then and now, but the “crack of the bat” remains on of the sporting world’s most thrilling moments.

MUHAMMAD ALI CENTER
The cultural center features exhibitions regarding Muhammad Ali’s core values on respect, confidence, conviction, dedication, charity, and spirituality.[2][3] An orientation theater helps present Ali’s life from birth to the present. A mock-boxing ring is recreated based on his Deer Lake Training Camp. A two-level pavilion, housed within a large elliptical room, features Ali’s boxing memorabilia and history. A large projector displays ‘The Greatest’, his signature fight, onto a full-sized boxing ring. There are also pods where one can view Ali’s greatest fights on video-on-demand terminals that feature pre- and post-fight interviews.

INTERNATIONAL HISTORY MUSEUM
Come face to face with some of the people and stories that changed the world forever! The Frazier International History Museum brings history to life everyday through live interpretations by costumed interpreters, multimedia presentations, educational programming and hands-on learning. Covering 1,000 years of history, our priceless collection is housed in a 100,000 square foot, state-of-the-art facility on downtown Louisville’s historic West Main Street. Our vision is for every visitor to leave with a broader knowledge of history, a greater respect for the human spirit and a deeper commitment to tolerance.

THE HIGHLANDS
Often referred to as “The Strip” or “Restaurant Row,” the Highlands in Louisville is best known for its eclectic local shops, restaurants, bars, and nightclubs. In fact, the three mile stretch of Bardstown Road and Baxter Avenue that intersects the Highlands has the highest density of bars and restaurants in Louisville.

KIZITO COOKIES
My name is Elizabeth Namusoke Kizito. I was born under a banana tree in Africa. My father taught me the business at his bakery when I was just a little girl. This family tradition came with me to America when I was 17. All the cookies and brownies I sell are prepared by my hand at my little bakery in Louisville, Kentucky. I encourage you to try each of the scrumptious treats our family whips up every day. We mix my father’s legacy into every single batch. – Elizabeth Kizito

The title of this tour pretty much says it all! On this fun and unique tour, you will get to see the best sights, hear the history and stories and taste the delicious traditional foods that give Louisville its unique flavor. 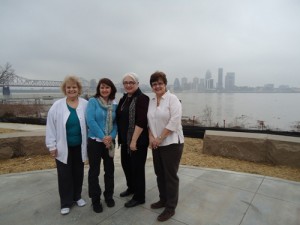 Any Occasion tours available.  BIRTHDAYS, ANNIVERSARIES, SHOWERS, or JUST BECAUSE. We will help you design a tour for that special occasion or special somebody.  Give us a call!